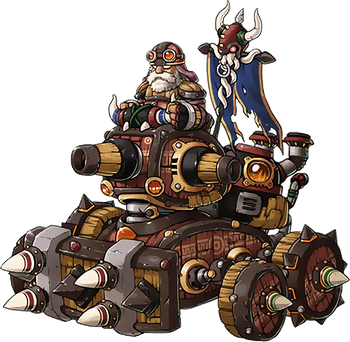 Talin Elfbane is a Dwarf leader (presumably ranked as General) who commandeers a large tank. He was in charge of the defenses of Hammer's Reach, then reappears as a regular enemy in Under Hammer, using his tank to run down players on the base platform, and throws bombs to those trying to complete the jump section. He reappears again in Thunder Hammer without his tank.

Firstly Talin Elfbane accuses the Grand Chase of being spies for the Elves, not believing that the Chase are hunting Ashtaroth. He is defeated, and the Chase then leaves.
He then makes a comeback trying to annihilate the Grand Chase in Under Hammer, though he tries to make it look like his appearance was a coincidence while Amy supposedly insults him by saying he has a crush on her.
In Thunder Hammer, Talin Elfbane appears yet again, trying to hinder the Chase with Thunder Hammer Riflemans, and denying Amy's accusations of him stalking the Chase (mostly her). Fortunately, his tank is nowhere to be found, as it is just himself and the Riflemen. As the Chase approach Talin Elfbane, he attacks, but is due to taking too much wounds from both Hammer's Reach (and presumably Under Hammer), he is knocked flying.
Talin Elfbane reappears again in Talin's Revenge, this time in an aircraft, ambushing them on their return trip to Serdin. Although the Dwarves have come to even terms with the Grand Chase by that point, Elfbane wishes to destroy them out of revenge, but is once again defeated by them.

Talin Elfbane poses a large amount of attacks. First he can use a charge with his massive tank. His tank also has a melee attack using a projector which fires the rockets. He can chuck bombs which emits flamethrowers to the side, which fortunately, can be destroyed. He can also shoot 3 fast powerful rockets. Lastly, he can make a small device that homes in extremely fast.
Interestingly enough, Talin Elfbane has two different hitboxes; himself and his tank. The tank's rider has lower defense than the tank himself, and thus, hitting him would make the battle end quicker.

In Under Hammer, his tank constantly moves forward (while reappearing on the other side) and he chucks out hand grenades like his fellow Iron Dwarf Engineers.

In Thunder Hammer, Talin Elfbane calls upon Thunder Hammer Rifleman to attack the Chase at the Platform Map. If the player does manage to get to his platform, he will cower a bit before using a flurried rush similar to Ditzy Rush, yet it does extremely weak damage and does not stun.
One hit will knock him away, but Talin Elfbane will eventually fall and land back on the platform. Hitting him again will cause him to be knocked away once more, and after more time has passed, he will come back again. Hitting him for a third time will knock him away and the word "Talin" will appear on the screen similar to how a "Danger!" or "Jump!" warning is shown, and players will be given a buff named, oddly, "Talin's Curse" which increases Defense.

Retrieved from "https://grandchase.fandom.com/wiki/Talin_Elfbane?oldid=59100"
Community content is available under CC-BY-SA unless otherwise noted.