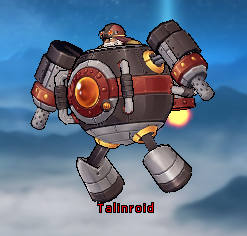 Talinroid is Talin Elfbane's aircraft. This is the boss of Talin's Revenge. He will move quickly and randomly all over the place, except he will not cross the half of the screen to reach the left side.

Talin's 2-Way Spreader Shot: Talinroid shoots 6 lines of 8 bullets in a ">>>>>" formation, with 4 of them going upwards, and the other 4 downwards. This attack leaves a gap in the center which the player can use to dodge the bullets. Basically, the same 2-way spreader shot of the Aero Sentry Keeper MK-1, only with the difference of his version being faster, lesser bullets, and leaving a larger gap.

Talin's Twin Spiral Shot: Talinroid shoots 2 lines of several bullets along a spiral clockwise motion. The bullets are distant from each other and large gaps are available for the player to dodge the bullets.

Talin's Spinning Shot: Talinroid spins and releases 7 circles of bullets. The circles move fast and leave large gaps between them, permitting the player to dodge the bullets.

Retrieved from "https://grandchase.fandom.com/wiki/Talinroid?oldid=55436"
Community content is available under CC-BY-SA unless otherwise noted.