from the Spirit World

Epilogue 4.7: Between Calm and Passion
Tekarion is the Spirit Lord of Fire and Ice that operates as a prison master in the Purgatory.

The Purgatory which was said to be the boundary between Elyos and the Spirit World was originally guarded by an Asmodian prison master and the Spirit Lord Tekarion on each side respectively. The death of his associate at the hands of Duel Pone Zec 10,000 years ago left him as the sole ruler of the prison.

A Beholder of Oblivion reported a rebellion to Tekarion where intruders from the outside were letting the prisoners free which he found quite unexpected. The prison master suggested they should set the Fire Dragon cannons at the top of the Purgatory but his alter ego wanted to just wipe them all out. Tekarion protested as it was too narrow in the area and he might destroy everything, making his other self disappointed as it would have been nice for him to get a taste of blood again.

Dio stated that they had not been able to beat Tekarion yet, therefore, he urged everybody to go to the top of Purgatory and defeat him.

When the intruders caught up to him, Tekarion expressed his pleasure to see the chiefs of the Moderates and Hardliners. Dio questioned why he betrayed the Demon Council though the prison master pointed out that they were already taken over by Heitaros so his counterargument was that they were the opposition to the Council. Then Veigas officially initiated the battle with Tekarion who was also eager to bring it on.

Epilogue 4.6: The Master of the Purgatory

Tekarion guaranteed that he would give them a comfortable solitary confinement room, declaring that they would never be able to escape. Ultimately, the intruders prevailed over him thus the prison master was forced to manifest his dragon form.

Epilogue 4.7: Between Calm and Passion

The Beholder of Oblivion was left horrified after Tekarion was defeated whereas the rebellion celebrated their victory.

Sieghart brought up Tekarion to the conversation where the prison master should have stayed neutral too, concerned that the power of the Demon World had tilted already.

Tekarion can be fought as a boss in Epilogue 4.6: The Master of the Purgatory and Epilogue 4.7: Between Calm and Passion in his dragon form.

Tekarion engulfs the whole area with either of his two attributes: Fire and Ice. With the domination of Fire, the Fire Dragon Knight becomes stronger as well as Tekarion's attack. The party will receive 2% more damage each second. As for the domination of Ice, the Ice Dragon Knight gets stronger and Tekarion's movement and attack speed will increase. Party members' movement and attack speed will decrease by 2% each second. Two of the same attributes appearing at the same time will bring a crisis while two different attributes will give players an opportunity.

In dragon form, 'Frost' and 'Heat' are generated whenever units are hit by Dragon's Breath or his magic that summons Fire and Ice Dragon Knights. Damage dealt with and received from Tekarion with a different attribute increases. If one of the two heads is defeated, the other will go berserk and create Dragon Knights and Fire Pillars periodically. Failing to defeat the remaining head in a given time will resurrect the one that is defeated. 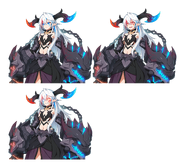 The expression system of Tekarion.