Treant is a large tree monster at the end of Trial Forest. He is generally not a challenge to most players, even for most players new to the game he may not be much trouble.

Treant's attacks are 2 swipes, and an apple throw if the player is too far away. His only special attack is immobilizing players with vines, which is very easy to avoid if the player jumps.

Note that he creates a JUMP Warning. This means that he will use an attack that causes an effect on grounded players. In Treant's case, he will immobilize characters in vines. Keep this in mind, as many monsters use "JUMP" attacks. The vines do mild damage to the player, and leave them vulnerable to a follow-up attack.
Also, as the name implies, Jump! 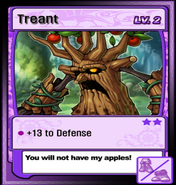 Treant's Monster Card
Add a photo to this gallery

Retrieved from "https://grandchase.fandom.com/wiki/Treant?oldid=53534"
Community content is available under CC-BY-SA unless otherwise noted.