The Troll is a beast that is inhabiting the Elven Forest and fought as a boss. There are variants of this monster known as the Stone Troll and Dark Troll which appear as minibosses in Forgotten City and Kaze'aze's Castle respectively.

There is nothing else known about the Troll in the Elven Forest other than being a guardian before it was possessed by Kaze'aze.

Upon reaching the Troll, the Grand Chase found out that the guardian became violent and was the one causing all the chaos in the vicinity. The Troll has been overcome by Kaze'aze's evil and thus they knocked it down.

The Stone Troll was encountered as the Grand Chase explored the strange city guarded by creatures made of stone and mechanics.

The Dark Troll was among the army of monsters fought at the castle before the Grand Chase reached Kaze'aze herself.

The Troll has a small combo of two hits that can trap the player before the last hit in which it hits the ground with its fist and causes a small earthquake that can send nearby players flying. It also has a running attack that sends anyone hit flying across the screen and a jump attack that causes a large earthquake that affects anyone on the ground no matter how far they are.

The Stone Troll and Dark Troll seem to have no new attacks and share the same abilities as the common variant. 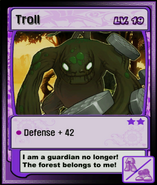 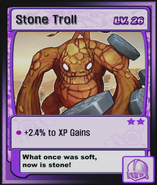 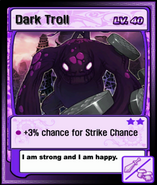 Promotional artwork of Grand Chase in the North American server featuring the Troll.

The Dark Troll in Act 27.3: Wandering Alarm.
Add a photo to this gallery 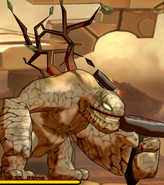 The Stone Troll in Forgotten City. 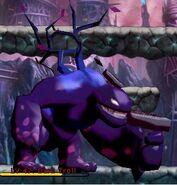 The Dark Troll in Kaze'aze's Castle.

Guild Boss summon cut-in.
Add a photo to this gallery

Retrieved from "https://grandchase.fandom.com/wiki/Troll?oldid=82109"
Community content is available under CC-BY-SA unless otherwise noted.