The Underworld is the land of the dead where many runaway creatures like Naamah, Hellstrom, and Berkas originate. It is a world parallel in existence to Aernas and a dimension separate from Elyos.

In Grand Chase Dimensional Chaser, the Underworld is the sixth region explored by the Grand Chase and consists of three regular dungeons and one Epilogue dungeon.

There is nothing else known about the Underworld and how it came to be is still a mystery. However, being a parallel dimension to Aernas implicates that the Underworld was created alongside the land of the living.

Souls are judged after entry to the Underworld. Evil souls will be punished and trapped for all of eternity within the prisons repenting their sins. Good souls, on the other hand, are free to live alongside the Haros, a tribe of demons native to the Underworld, and await their reincarnation.

There are portals connecting Aernas to the Underworld due to the weakening of barriers that separate the two dimensions which in turn is a result of the portals connecting to Elyos that have started opening across the world. The few known portals are the ones from which the Nightmare Circus escaped through. Berkas is also known to have come into Aernas through a portal as well as the Sanctum of Destruction and The Crucible.

Although the Underworld is a place where the souls go after death, it is also the home to several living species.

The Haros is a tribe of native demons where Rufus originates. As guardians of the Underworld, they have the authority to watch over the souls as well as bringing them back if they escaped.

The tribe has an upper and lower class to which the latter are banished into the Wilderness. Amongst the lower class are the Bounty Hunters responsible for chasing down evil souls and other creatures that have fled out of the Underworld.

The Underworld Train is an express service that ferries souls into the Underworld. The trains carry both passengers and prisoners, guardsmen, hostesses, and a single conductor. However, the trains are also sentient as they engage in an automatic defense system upon the defeat of its conductor. The service extends from Aernas to Elyos being found in regions such as the Burning Canyon.

Some notable service crew and conductors include Casey Bones from the Monster Train 301 as well as Hard Rock and Hyde. They can easily recognize a Haros as Hyde was able to distinguish Lass as a half-Haros.

It is said that Iron Dragons also inhabit the Underworld. The power structure within the species has been firmly established for thousands of years with the younger dragons as subordinates to the ancient and more powerful ones. Berkas who was unsatisfied with his place within the power structure chooses to escape into Aernas where the power flow is less stable.

Although not explored, the following are locations in the Underworld mentioned in Hyde's background.

A school located in the Underworld.

A cafe located at a five-way intersection that offers a drink selection including Darjeeling tea and plays white noise for its customers.

A clean and quiet place for students to study or sleep. Neoul Park is across the street from this building.

A park across the street from Sangah Study Room. 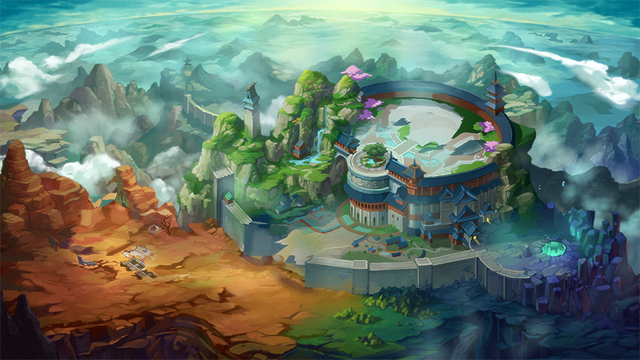 Background of the Underworld.

The Underworld as a room in PvP.

The map of Underworld in Grand Chase Dimensional Chaser.
Add a photo to this gallery

Underworld City
(Night)
Add a photo to this gallery

Retrieved from "https://grandchase.fandom.com/wiki/Underworld?oldid=80496"
Community content is available under CC-BY-SA unless otherwise noted.