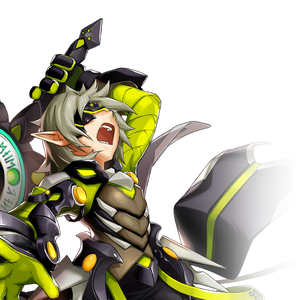 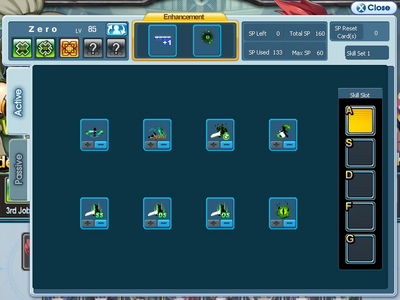 SP: 1
Requires: [Special] Bite Off Lv 3
Cooldown: 20 seconds
AP Consumed: 46
Info: Zero spins Grandark around, then unleashes a shockwave in front of him and a shorter one behind him.
Grandark Domination: Zero can move around while spinning with ← and → keys.

SP: 2
Requires: [Effect] OS Enhancement
Input: Auto
Info: Gives Zero a Domination gauge underneath his AP bar that is filled by attacking using his Stances. Enhances several sword skills, reduces cooldown for skills and techniques, and allows him to perform Rocket Jump while in Sword Stance. Grandark Domination lasts for 30 seconds or by changing back to Normal Stance. 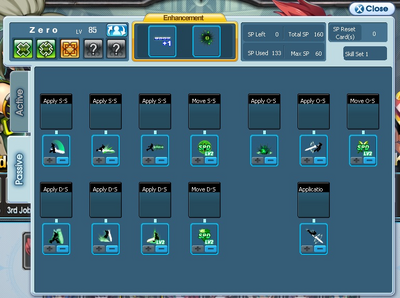 SP: 2
Requires: [Effect] DS Counter Enhancement
Control: →→ while in Defensive Stance
Info: Allows Zero to run in Defensive Stance, shoving enemies in the process.
Note: While this inflicts small damage, it does not contribute to the Grandark Domination bar.

SP: 2
Requires: [Effect] DS Dash Move
Control: During Defensive Stance, Z + X
Info: Allows Zero to teleport out of Defensive Stance to a nearby enemy, making them flinch for a second.

Retrieved from "https://grandchase.fandom.com/wiki/Vanisher_Skill_Tree?oldid=79347"
Community content is available under CC-BY-SA unless otherwise noted.