"The messenger of destruction."

Despite being too old by human standards, among Asmodians in Elyos, Veigas is still considered young. However, he is also considered a prodigy because as far as everyone knew, the boy was specially chosen by the supreme deity, the Creator, to serve as his herald to destroy other dimensions.

Originally, Asmodians were created by this god to maintain the balance of the universe destroying any dimension that presented a threat to the grand scheme of things. Therefore, they were developed as superior beings of Elyos, becoming leaders of the demonic tribes.

With a society divided into families each of which holding different powers, the vast majority of them soon took a liking to entropy and destruction. Instead of honoring their posts as guardians of the universal balance, these Asmodians began to see themselves as the destroyers of worlds reveling in spreading chaos and promoting death and suffering. This is the case of Veigas who, while still young, became the leader of the Terre clan. Chosen by the Creator himself, Veigas received the cosmic cube Deus Ex Machina, an intelligent magical artifact capable of communication and storing an extensive amount of knowledge within.

Opposing the Hardliners were the Moderates such as Burning Canyon led by the young prince of darkness Dio. The Moderates were trying to keep their original roles as guardians and protectors of the dimensions of the universal balance and always conflicting against the Hardliners when they seemed willing to destroy a new dimension without any need, just on a whim or for fun. It did not take long for Veigas and Dio, with their philosophies as opposed, to become great rivals.

In the end, when the First Demon War occurred where the Hardliners faced off against the kingdom of Kounat, Veigas was busy in another dimension. Returning to Elyos, he found out about the massacre and defeat the demonic tribes had suffered in that world which still stood. To further increase his irritation, he also learned that his rival Dio had fled stealthily like a coward into that world and had probably helped to seal the Dimensional Portals linking the two dimensions and defeat the Hardliners' soldiers who had gone there.

Imagine the joy of Veigas himself when he heard the voice of the Creator who spoke directly into his mind and not through Deus. "Destroy Aernas" was all he said. And that was all that Veigas needed to ensure that this world would cease to exist forever.

As a being of high position in Elyos, Veigas has a lot of power and as such arrogance. 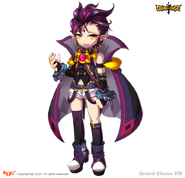 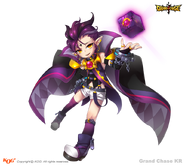