Deceased
Vice was a close henchman of Kaze'aze. She was a court magician from the Kanavan Kingdom who created the erosion of souls. She was also responsible for ousting Anyumena and covertly placed Kaze'aze in the throne to put on an act like she was the Queen of Kanavan.

There is nothing else known about Vice other than being an assistant to Anyumena back when she was still a princess. She became the closest person to Karina Erudon that even after she lived through a great change as Kaze'aze, the magician was willing to stay by her side.

Vice was first seen talking with the Orc Lord on how she was right that their precious guests would try to escape and not wait for him. After Rin, Asin, and Edel took down the orc, the shady woman learned that they already found out the erosion of souls. As the Serdin Knight declared to arrest her, Vice started to recognize the other two and wondered why the number of Grand Chase members was different in Karina's story, insinuating that their comrades were already dead. As she went after the trio, the lady also recalled that there was one more that was annoying.

After hearing Gerard Farenwhite called himself the Ruby Knights leader, Vice showed herself alongside Elscud Sieghart. Rin identified her as the shady woman they met from the Elven Forest but she pretended to not recognized them and suggested that the Knights of Serdin were scheming instead. Then the court magician ordered Frederick to arrest Gerard for impersonating the real leader of the Ruby Knights along with the trio.

Vice saw Gerard and company along the way, saying that she did not think they would get out of prison that fast. Asin dared the magician to show her true self but she just turned down the challenge and kept her distance from them.

As Edel realized the truth of the situation in Kanavan, Vice professed that the knights affected by the soul erosion were just props for a puppet show and threatened to dispose of those who were not part of the scheme.

Still pursued by her adversaries, Vice summoned the Shadow Drillmon to take care of them.

As confusion grew among the group, Io revealed to them that Vice took over the kingdom and switched the Queen with Kaze'aze.

Vice demanded to stop disturbing her as she was just trying to get paid. When called corrupted, the magician argued they did not know anything and would not understand it. Despite her persistence, Io was able to tie her up for a little while.

As she caught up to them, Vice asked Karina a chance to fix everything but the fake Queen said to not be attached to small things and reminded the magician that she had something else to do. Refusing to end like this, Vice was determined that they must know what happened in the past and what would happen in the present.

In a flashback, an upset Vice told Karina of how she supposedly messed up her test when in fact she was in the highest rank. She said that it was not a good grade to brag about and ended up getting a worse grade than Anyumena because of helping the princess study. Karina asked Vice to stop comparing herself to Anyu and pointed out that their role was to assist the princess, adding that she completed their mission perfectly. After promising to make the princess the first place and herself in second, they proceeded to prepare the small banquet for Anyumena with Vice saying that Karina needed to prepare for a bigger banquet next time.

Trapped in the magic seal, Io's squad started seeing strange illusions showing the massacre of the royal family with Karina telling Vice to get the princess and get away from the place. She insisted on not leaving her alone but the royal guard believed that they would not be able to defeat Ashtaroth with just the two of them and she should only think about their allegiance with the princess. Eventually, Vice went ahead and she waited for Karina.

Epilogue 7.2: To the Shadow of Corruption

A despondent Vice appeared in a cutscene that took a peek on her past. She was seen in a distance behind Karina who was still denying her part in the genocide.

Continuing into the illusions of Kaze'aze's past, Vice was seen pleading for Karina to take her but Ashtaroth asserted that she was doing something useless as the royal guard already belonged to him.

Stellar complained that Vice should have discussed the change in plans but she blamed her back for messing up everything. Shortly after, Decanee unveiled herself and asked if there was a specific appearance she liked with the court magician responding that it did not matter, adding that the important thing was that she was in front of her then. The demon pondered on why she did not bring her in the past but Vice truly believed she was just not good enough at that time. Decanee said that she should have let Stellar handle everything but Vice did not want to leave a task meant for the demon to someone like the Serdin magician.

While the mages are panicked over her making an enemy of Kaze'aze's closest person, Stellar was still infuriated on how she was treated by Vice and was scheming on how to take her down.

Finally confronted by the opposition, Vice dismissed the idea of being tricked and claimed that she knew about Karina's plan more than anyone else even when it dared to challenge the Creator's rule. Then she advised worrying about themselves first before Aernas since their fate was already doomed the moment the Tower of Disappearance was summoned. Hearing that they would never give up even if it was the smallest chance, Vice passed the question of why the people of Kanavan gave up on Karina so easily and why was she targeted alone among all the criminals in the world. As she reached the point of no return, the magician left behind what was left of her humanity and transformed herself as a monster.

Her battle against the Grand Chase ended to defeat and left her blind. Later on, the dying Vice was found by Decanee and apologized for not being able to do the task. The demon thanked her for the hard work and said that if the court magician were to be lucky in the old Underworld, she may meet the "Karina" she kept speaking of. However, Vice told Decanee to stop denying herself because no matter what anyone says, even if the demon does not believe it, she will always be her Karina.

The magician spent the final moments in the arms of her precious friend, uttering her first name for the last time.

Vice can be fought as a boss in Act 25.9: Under the Queen's Name and Epilogue 7.7: Dream of a Butterfly. 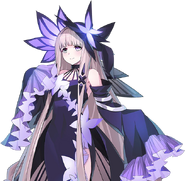 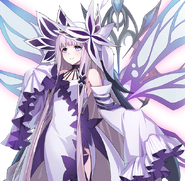 (Epilogue 7.7: Dream of a Butterfly NPC)
Add a photo to this gallery

(Epilogue 7.7: Dream of a Butterfly NPC)

Retrieved from "https://grandchase.fandom.com/wiki/Vice?oldid=81876"
Community content is available under CC-BY-SA unless otherwise noted.