Wendy is a heinous giant monster that is living atop Trial Tower and fought as a boss.

There is nothing else known about Wendy other than being part of the test for Elesis, Lire, and Arme to get into Grand Chase.

Though her role in the current version of the story is unknown, it was revealed in Season 1 that after the fight, Wendy was only faking defeat and is not evil.

Wendy's attacks are an icy breath that can freeze players, a spinning ram, and pounding the ground making an earthquake in which players must jump or suffer damage.

Onyx Wendy (also known as Black Wendy) is a mini-boss fought in Primeval Island. It has the same appearance as Wendy from the Trial Tower but instead has a gorilla-like face and darker fur.

Onyx Wendy has multiple attacks. Firstly, it has a roll and a breath like regular Wendy. The jump attack it performs is different however as it jumps the ground. Also, sometimes when it rolls, it may fall flat on the ground causing a shockwave-like effect that lifts nearby opponents. 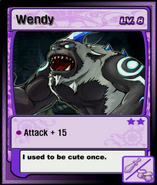 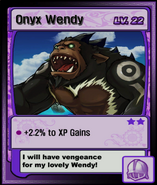 Onyx Wendy's Monster Card.
Add a photo to this gallery 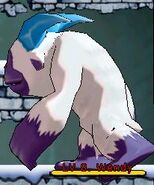 Retrieved from "https://grandchase.fandom.com/wiki/Wendy?oldid=81214"
Community content is available under CC-BY-SA unless otherwise noted.