Unknown
Yohanna is a subordinate of Heitaros Cratsus tasked with searching for something that a certain Bounty Hunter has taken.

There is nothing else known about Yohanna other than being an associate of Oz Pone Max Reinhardt in the past.

Yohanna let her combat drones know that their father, Doctor Oz, was on his way.

As Oz figured it was her that could use the Ancient Demon guardians or mass-produced combat drones, Yohanna made a cynical remark on how it had been years that she could not believe he was still alive all thanks to her according to the doctor. She observed that Oz seemed to have acquired strong allies and it was looking like there was no choice but to run thus before fleeing, Yohanna told him that she believed she found the clues that would lead her to the thing that stupid Bounty Hunter hid. On top of that, she informed the Grand Chase that these combat drones would not be eliminated unless they were destroyed at the same time.

In a flashback, Oz was awed by the sight of the ancient demonic city when Yohanna came to introduce herself professing her pleasure to be working with the doctor.

Act 18.6: Artist's Performance at the Army

In a flashback, Oz fretted if his cursed research that nobody should know about went out, unaware of Yohanna listening in the distance.

Zero felt familiar energy hence Oz presumed that Yohanna was here. Sooner or later, the Grand Chase encountered her once again with the doctor figuring out that the thing Heitaros was looking for was in the Underworld to which she had confirmed. Knowing it was close by, Yohanna groaned for not thinking that the Bounty Hunter would hide it in the Underworld before running away. At a loss about what was Heitaros plotting, she sneered at them for thinking they could understand his thoughts.

Amidst the battle, Oz hustled Zero to attack Yohanna but hesitated much to the doctor's dismay, reasoning that he was going to kill her anyway. To her amusement, she continued belittling the two of them saying the soldier to catch Duel was used like this when out of nowhere, Lime jumped on her. Yohanna was abashed for not thinking she would lose like that and at the moment that it was Oz's turn to mock her for relying on her dolls, she should listen to the doctor's advice next time.

Yohanna commanded someone to take care of the invaders as she had to find something and had things to do, stating further that Heitaros waited for a long time and they could not make him wait for more.

Failing not to let anyone in, Yohanna carried on saying she could not trust Haros and how they could betray Heitaros but Oz told the commander that she misjudged them if she could not read their uneasiness. Yohanna wanted to know if the doctor brought everyone again and claimed to have remembered all of his battle tactics, adding that it would not be easy this time.

Weary of Oz who kept getting in her way, Yohanna questioned him if he was scared to see the result of his experiment. After the doctor told her his experiment ended with Grandark, she said it was just a sword and that Ancient Demons' powers were more than the sword, mentioning that he knew better. Oz reckoned that Yohanna desired something unnecessary, asking her if she wanted to start a battle again or him to destroy the demons. However, she insisted it was the opposite as the Demon God would create the world around Elyos and then demons would prosper. Having lost her bearings, Yohanna mistook Rufus as Legis.

Yohanna can be fought as a boss in Act 18.9: Commander's Identity and Epilogue 6.1: Swaying Ambition. 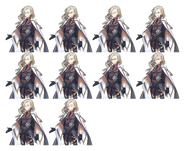 The expression system of Yohanna.