Yulia didn't join Heitaros' troops because she agreed with his ideas. It was because their troops were always active and there was always more missions for a Special Ops agent like her.

She was almost born for this job, as she would rather have spontaneous and tiring work than repeating the same thing over and over again. As she completed and carried out more missions, her reputation was starting to spread.

Yulia returned home from an extremely hard mission and because of that, she was thinking about disappearing for fifteen days. When she got home, she noticed that there was an intruder and quickly suppressed the threat. However, this intruder was one of Heitaros' close followers.

"The rumors were true about you. Starting tomorrow, you will be directly under me. I will make you the commander of a Special Ops squad."

As a soldier, it was natural for her to follow orders from above and do various tasks but this was all too sudden. Not only that, this promotion was quite big and unlikely.

"Guilty Seven is the name of the new squad. I am looking for the seven strongest warriors in the Demon World. Yulia, you will become one of them."

Yulia didn't want to miss a chance like this and she was finally going to be a commander like she always dreamed of. Unfortunately for her, she did not understand what would be in store for her in the future.

"Welcome to the Demon Force Guilty Seven, you can call me CEO from now on."

Yulia can be fought as a boss in Act 15.6: Sloth of Yellow Appears and uses her designated skills as a unit. 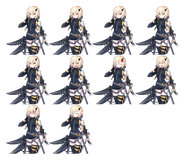 Sloth of Yellow is the recurring term used in the actual game. However, the majority of Guilty Seven members were named by Color + Sin. For consistency, 'Yellow of Sloth' is preferred by this Wiki.

Retrieved from "https://grandchase.fandom.com/wiki/Yulia?oldid=82213"
Community content is available under CC-BY-SA unless otherwise noted.