Zero the Hero is a limited edition armor set that was available to the players who purchased the Wandering Hero package during Zero's pre-release event. It can only be worn by Zero and the character must be at Lv.30. 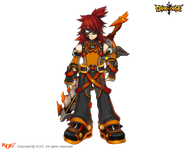 Concept art of Zero the Hero.
Add a photo to this gallery

Retrieved from "https://grandchase.fandom.com/wiki/Zero_the_Hero_Armor_Set?oldid=79086"
Community content is available under CC-BY-SA unless otherwise noted.